Most, if not all of you, know by now that Sophie's here!! I hope you received a birth announcement by e-mail. If you didn't, let me know and I'll send it over.

Here's how it went down:

2:00 PM: At my WEEK 41 APPOINTMENT (ugh.) my doctor tells me that I hadn't made any progress since the last week and that she wanted me to do my non-stress test that afternoon at the hospital. We discussed the possibility of inducing next Tuesday.

3:00 PM: Non-stress test went well. Plenty of fluids, too. Nothing wrong. By this time, I'd given up the possibility of her coming "any second now", which was driving me bonkers anyway. I'd convinced myself that I was probably going to be pregnant for another week and to just stick it out. I even considered going to work the next day.

10:00 PM: Sitting on the couch (on a blanket) watching the news, I suddenly felt that I had lost a little bladder control. I rushed to the bathroom and decided that the fluid probably wasn't coming from my bladder. Steve and I both were sort of dumbfounded -- especially since my appointments that afternoon didn't give any good news. We looked at each other, not knowing what to do, so we packed up some stuff and headed to the hospital. When it finally hit me that my water had broken, I was so excited, I couldn't wipe the smile off of my face.

1:00 AM: I hadn't gone into active labor yet, so they hooked me up to some pitocyn to get things moving.

3:00 AM: By this time I had made it through contractions OK, but they were getting harder and harder. I thought for sure I had made speedy progress, but when the nurse checked me, I was only a THREE. I about died. I thought that if my progress was going to continue to be slow, I'd probably be dead by the time the baby came if I didn't do something. So, I asked for an epidural. Seeing the doctor stick a big fat needle in my back (that I refused to look at and I don't even want to know how big it was) was the only time during the whole birth that Steve almost passed out.

5:30 AM: After some uncomfortable catnaps (The bed were AWFUL. They needed to be about a foot longer. I guess it didn't help that I couldn't adjust my position very well without the use of my legs.) I was checked again and I was only dilated to a 4 1/2. Fantastic. Maybe I'll have the baby on Memorial Day instead.

6:15 AM: Another nurse takes over the previous nurse's shift and decides to check me. I was an 8! NO WAY!

7:45 AM: I'd been fully dilated for at least a few minutes. The epidural started to wear off one side and I was feeling some really hard contractions over there. I decided I wanted to go ahead and start pushing before it got any worse. After 20 minutes of that, it got too painful, so they cranked up my epidural and we waited for about an hour for the baby to descend a little on her own.

10:12 AM: After pushing for an hour, out came this purple slimeball covered in white, waxy stuff. Because she came out face-up, she had this goose-egg thing towards the front of her head, too. I fully expected her to come out looking like an alien and she did.

After we all got cleaned up and settled down in the recovery room, they brought her to me. It hardly seemed like the same baby. The waxy stuff and goose-egg were gone, her hair was done with a cute pink bow and she was CUTE! Now it was just a matter of what to call her.

A lot of you know that naming the baby wasn't our favorite topic of conversation while I was pregnant and I thought it would be easier after she was born. Maybe, but only slightly. She didn't have a name until about 8PM the day after she was born. We finally agreed on Sophie. As soon as we started calling her that, I can't imagine calling her anything else. We also wanted to name her after my grandma, who is now a brand-new great-grandma. Inez is actually my grandma's middle name, too, but she has been called that her whole life. When I told her what we'd named the baby, she didn't really believe me at first. Then she got choked up and said "Thank You!" Which made me choke up, too. (It doesn't take much these days. Just thinking about crying makes me cry.)

We came home yesterday morning and today she's been great. Milk's finally coming, thank goodness, and my mom, a very anxious new grandma, will be here in the next few hours. That will be another cry-fest, too, I think.

I think one of my favorite parts of this whole thing is watching a transformation in Steve. Before the baby came, we'd joke about how he'd be queasy during the birth and probably pass out. And the fact that barf and poopy diapers make him sick, too. But during the birth, he jumped right in when I was pushing and even cut the ambilical cord when she came out. And since then he's holds her just to hold her, talks to her in a little voice and has even changed a couple of diapers. I can tell she has him wrapped around her little finger and I love it. :) 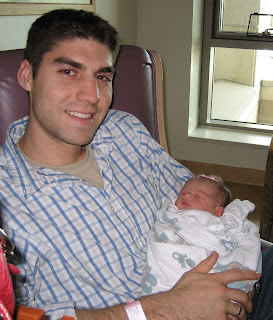 Well, I didn't receive a birth announcement. And I'm your home teacher. And Steve's quorum president.

Cassia received one, though. Even still, I had to hack into her e-mail account to read it.

I'm not too offended, though - I had to find out about the birth of my home teaching companion's new baby from secondhand sources too.

Congratulations to you both!

Oohhhhhhhhhhhhhh, I'm crying!! One of the very best things about having a baby is to see the love of your life with your sweet little baby. There really isn't anything more attractive and more fun than having your husband love your baby as much as you do. OH, it just makes my heart swell! That sounds cheesy, but I think you know what I mean! :)

Look at all her hair!! Wait, is it light brown? :) So cute, and we're happy to hear everything went well for you guys. You were in labor for about as long as I was, which wasn't long at all. Hey, send me an e-mail - chelsbennett75@hotmail.com. I want to see more cute pics! 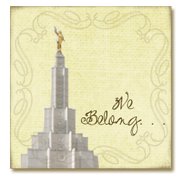